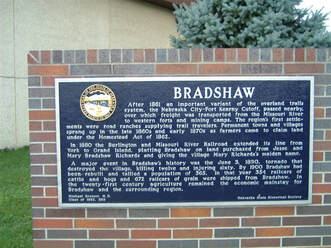 1870 -  The first Post Office opens in the area at Aiken Mills, north of the present town
1873 -  The post office is moved to a site about one mile west of Bradshaw
1874 -  The first frame school building is built in District #56
1879 -  Post office moved two miles east of Bradshaw and renamed Lenox
1880 -  The present site of Bradshaw was set by surveyors who placed the depot here.   The first store owned and opened by W.D. Post, was a post office, with him being the post master.  He was also the depot agent, telegraph operator, grain and livestock dealer, and he ran the general store.  His house was where Fred Collingham's house now sits.
1882 -  The first resident physician to the town was Dr. A. R. Allen 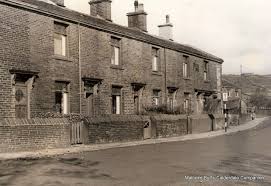 1890 -  Early on the evening of June 3, the entire village of Bradshaw was flattened by a huge twister that demolished the booming town.  As is described in the Bradshaw Historical Sketchbook of 1902:
"The residents of this little village and the surrounding country stood in helpless suspense and watched two peculiar storm clouds approaching, one moving from the northwest to the southeast and one moving from the southeast to the northwest.  The clouds met near the southern edge of Bradshaw and before the citizens could seek a place of safety, the cyclone was upon them.   Not a house in the village was not damaged and most of them were entirely demolished.  Businesses, houses were ruined and many of them were swept away entirely.  The flood of rain and the intense darkness that followed made the situation most pitiable."
The tornado hit Bradshaw about 8:20 p.m., but the news of the tornado did not reach York until after midnight.  This was when a rider, on horseback, road hysterically into town to report the news.  Not much later, workers at the York rail yard watched a single stock car come rolling down the track from the west.  Its side door was peeled back and  flapping in the wind, and they knew that a single car could not run eight miles down the track without an engine.  Until the news of the  tornado hit York, no one knew that the powerful storm had pushed that lone car eight miles down the track.
Different accounts in different area newspapers listed various number of people killed by the storm.   It is estimated that five to 12 people were killed with over 60 injured by the tornado.  Throughout the night, people tried to find loved ones only by the sounds of their moans and cries.  Strangely enough, the first rescuers in town found a baby alone in the middle of the street playing in a mud puddle, unconcerned about all of the ruin.
Several people carried scars of the twister long after it was gone.  George Foster, a hired man on a farm north of town, was looking out of the cave he was in to check on the storm.   When all of a sudden, the cave door blew back down on him, taking his ear off.
Bradshaw became famous for the time because of the storm.  People from all over the state sent money and anything that the people could use to start over.  On the next Sunday, people were offered a train ride from Omaha to Bradshaw to look over the wreckage.   So many wanted to come, that two trains had been sent.
After the tornado, all of the businesses and houses had to be rebuilt.  There was a different bank, and different newspapers, and other new businesses in town.  In many ways, this was the beginning of a totally different Bradshaw. 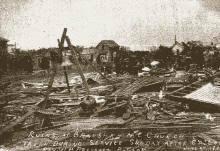 1891 -  A new school was built after the other was destroyed.   It was a two-story building with four rooms, a hallway, and a cloak room.  The county superintendent's office, in York, donated $500 to hope rebuild the school.  It was built by the Bradshaw Improvement Company, who also built the town hall in 1902, and helped to organize the Plainfield Cemetery Association.
1894 -  Photographs show frame shops and stores lining Bradshaw's main street
1895 -  First light plant came to Bradshaw
1900 -  Rural mail service was introduced to farms
1901 -  Bradshaw Independent Telephone Company was organized.  The first central telephone station was in Whitfield's Grocery Store.  Bradshaw telephone service operated as a switchboard until 1961.
1903 -  Most of Bradshaw had electric lights
1904 -  The Farmer's Shipping Association was organized.   This was a stockyard collection point of  the railroad.  In the first few months, there were 322 head of  cattle and 4360 head of hogs shipped out.  This filled 74 railroad cars.
1905 -  On October 5, the light plant closed.  Brick sidewalks were provided by the Bradshaw Businessmen.  Phone service was introduced to the county.
1906 -  In February, Cordell Brown reopened the plant and electricity was restored.
1907 -  Water system ends the days of the village water tower.
1909 -  Bradshaw Volunteer Fire Department was organized.   There were three active grain elevators in town.
1910 - Bradshaw was ranked second in Nebraska for shipment of fat cattle
1912 -  A new train depot was built 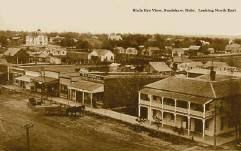 1916 -  A picture theatre was opened in town
1917 -  In January, the Village of Bradshaw took over the operation of electricity distribution.   Many Bradshaw boys leave for WWI.
1919 -  There was a severe coal shortage in Bradshaw.   By December, most of the soldiers were home from the war.
1920 -  On October 12, there was a large Homecoming Celebration for all of the returning servicemen.   This year also began the tradition of community fairs.  Bradshaw Fall Festivals included contests and games like present - day county fairs.
1935 -  Great dust storm hits the town
1940 -  This was the approximate year that the Farmer's Cooperative Association of Bradshaw was started.  The elevator still operates today.
1964 -  Around this time, the first center pivot irrigation system was set up in the area.  On May 5, a tornado touched down near Stockham and passed just north of Bradshaw destroying many homes and farms in its path.
1970 -  In the late 70's, the American Agricultural Movement gained Bradshaw's support.  Representatives from Bradshaw went to Washington D. C. to lobby for better farm legislation.
1980 -  Bradshaw celebrates its first century on May 31 and June 1.
SCHOOLS
1872 -  First Bradshaw area school was in a dugout on Lincoln Creek
1874 -  District 56 opened a school in an old store building in Bradshaw Township, on one acre of land
1889 -  The first town school originally had two rooms.   A few years later another room was added and that year a second story was added to the original building.
1891 -  New school built after the other was destroyed.   It was a 2-story building with four rooms, a hallway, and a cloak room.  It was built by the Bradshaw Improvement Company, who also built the town hall in 1902, and helped to organize the Plainfield Cemetery Association.
1902 -  NO SCHOOL THIS YEAR!!!  This was because of a smallpox epidemic.  In a June book about Bradshaw it stated: "the citizens of Bradshaw have always manifested a deep interest in our public school and are justly proud of the record of the past."
1911 -  The Bradshaw Monitor  boasted one of the finest schools in the count's villages,  running at one of the lowest costs.  The school's High School Library had the highest value and the highest attendance, compared to other area schools.  The only area that Bradshaw was not the highest in was salaries for the teachers.  The newspaper also printed the school's song:

Oh we're all from Bradshaw High School;  As anyone could guess;  'Tis here you find the brainiest heads;  The pride of the B.H.S.;    For we know how to work,  we know how to play;   We know how to do things brown;   We're the bravest boys and prettiest girls; In any Nebraska town;
Chorus:
Bradshaw High School, High School, High School;    Bradshaw High School;   Hippety Hip;  Hurrah, Hurrah;   We're sure to win success;  For never a school in all the world was in;   with the B.H.S.;  Oh yes, we're all from Bradshaw;  A school that's all O.K.;  If ever you come to visit us;  We'd prove just what we say;    For we know how to work;  we know how to win;   We know how to make things go;  We're proud of the fame;   of our High School name;   Now don't you believe that's so?
1922 -  A new three story school was built.  The school's first gymnasium was in this building.
1923 -  Basketball for boys and girls began
1930 -  The Pep Club was organized in support of the athletics
1933 -  Bradshaw's first athletic banquet was held this year
1944 -  Bradshaw's Band was established
1951 -  A shop building and bus barn were built northeast of the school
1953 -  The School Board turned the gym into a library and built a new gym.  Eight-man football started.
1954 -  Kindergarten began at Bradshaw
1968 -  The Elementary building was added to the school
1984 -  First year for flag corp
1990 -  FBLA began to make its move.  Ed Wiley and Jamie Wahl were Mr. and Mrs. FBL and from the same school.
1991 -  Boys basketball team was the District Champions, football made it to state playoffs, and there was no girls basketball team for lack of interest.
1993 -  Choir members formed a show choir to entertain the public
1995 -  First full season of six-man football
1996 -  Last year for Pep Club
1997 -  The football team qualified for State Playoffs, One-Act received a first place at CRC, and talk of consolidation began with Henderson.
1998 -  During the 1997-1998 school year, the school had the opportunity to spend their last year with five foreign exchange students:  Bruno Fiego, Dennis Follmann, Klaus Fritzsche, Espen Spilling, and Arjen Wiedijk.  Also, the 97-98 school year was the end of the 100 year anniversary for the beginning of the school.  "For Every Ending, There is a New Beginning!"  --  The 1998-1999 school year will be exciting for both Bradshaw and Henderson.  Forming the Heartland Community School:   Henderson/Bradshaw is the most interesting outcome of the last 101 years.  There are 38 girls out for Volleyball and 34 guys out for football.   There are 45 students in the Freshman class, 54 students in the Sophomore class, 39 students in the Junior class, and there are 43 students in the Senior class.  Heartland has one foreign exchange student this year whose name is Sebastian Emura.